With Raid Eggs appearing again the length of Raids became 1 hour only. In my town we have huge problems with, f.e. Tyranitar raids, because u don’t really know who will hatch from 4T and should move really fast to take part in.
Do u think is there a chance for a 2hour raids system to return?

I hope so, the other system was better for the reason you mentioned.

I fully agree that the other system was better. I’m hoping the eggs are only a bi-product of the beta test for EX raids and everything will return back to normal once the beta has ended.

1hr Raid window is a step backwards. It’s much harder to co-ordinate a group for battle in that short a time. Most chat I see on Dicord is full of " give me 15mins and I’ll be there". You have several people do that and a 30-45mins is used up waiting for all the interested parties to get there. That’s a large chunk of the battle window gone if the calls been put out quickly.
If it stays it could cause more angst with players as some will not wait for others then the one missing out will get upset and it will snowball and turn people off Raiding. Niantic wouldn’t want less Raiding as that’s less $$$$$

I agree it’s a problem for three and four star raids, but right now there is only one legendary appearing in each area, so you know what that raid is going to be and you can coordinate before it actually hatches. I’ve only been doing legendary raids since July…maybe a ttar or two

While I like the surprise of seeing what is going to hatch from an egg I do not like the effect it has had on the game. It has incentivized spoofers to fly to gyms and claim them for their team in order to gain a ball bonus for holding the gym. I think you might be on to something @DishTR with your suspicion that the eggs being reintroduced may be in association to EX raids.

I agree that the eggs are a part of the EX raid system, considering how suddenly they just appeared, but I don’t understand the Spoofer argument here. Most spoofers just can’t be bothered and join only when there are others in the lobby.

@JoshHack I’m speaking to what I’ve witnessed since the eggs started hatching raid bosses again. I know all the spoofers in my area, they haven’t been spoofing like they used to but now they are showing up in gyms again. When a level 5 egg appears atop of a gym that is controlled by say team Instinct are you still able to battle it if you are on an opposing team? I’m asking because I haven’t been able to play as much as I like and confirm this personally but I assume that it is possible because thats how the old egg system worked. With that being said, if you are able to battle an enemy gym while there is an egg atop a gym and claim it for your team then you will be awarded with a gym ball bonus after beating the raid boss that hatched from the egg that your team has control of.

What I’m getting at is: I’ve witnessed an increase of spoofers in gyms most recently. I believe it is because once they know of a level 5 egg they want to claim that gym for their team in order to get a ball bonus and increase their odds at catching a legendary dog. So my question is, can you battle a gym that has an egg on top of it?

@SCArsenalGunner You can battle it up until the point when the egg hatches, like the old way. To answer about the spoofers, many of them are in bigger cities anyway, where gyms rarely last more than 10 minutes. This is why (at least in these cases) I can’t see spoofers and regular players trying to battle it before the raid as it wouldn’t last. In smaller towns I’m sure it’s probably quite a common occurrence as no one will take it down in time.

Yesterday the Raid Pokemon was on display on top of the Gym after they Hatched.
Today I had to click on the Gym to see what it was as only the badge was visible. Not sure if this is a new thing or a bug? 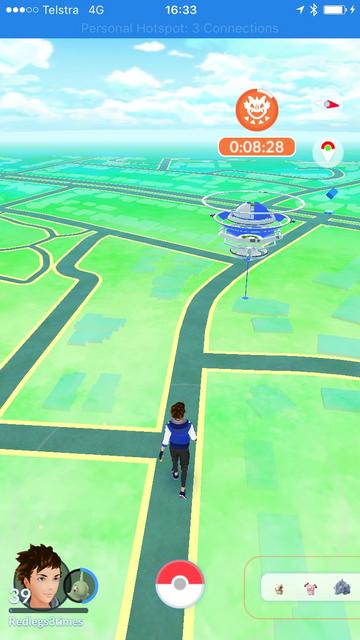 You’re correct, spoofers flood gyms once a four or five star egg is about to hatch. Josh is a spoofer and defends them relentlessly.

Yes its a pain. I experienced it personally today. I went Riakou hunting after lunch and I saw a lvl 5 egg pop up at another gym near me while I was battling a sponsered gym close to where the egg popped. I beat the sponsored gym, put in my best Blissy, and drove to battle the gym that the egg just popped. The gym the egg popped up at is located at a fountain, no one was physically there but me. I beat the three pokemon in the gym two times and when I went into battle it the third time and claim it for my team there was spoofer that flew in and put there Pokemon in the gym while I was battling it and fed the Snorlax a Golden Razz just in time to motivate it back up to full health before I knocked it out! The spoofer didn’t remotely, remotely, throw any more berries and I took it down. I knew the spoofer would take it back and my best bet would be to battle some other gyms and coordinate people on discord to help me fight the Raikou and try to come back right before the egg popped to retake the gym from the spoofer. I messed up the timing and came back 53 seconds before the egg was about to pop. Low and behold the spoofer was in the gym. I got enough people to come out, did a private raid, and beat it but I didn’t get the gym ball bonus I would have if it wasn’t for the spoofer. I spent nearly an hour coordinating the raid and the spoofer spent maybe three minutes to claim it for their team. I believe this is a reason why Niantic changed the eggs from popping from an hour timer to just appearing and giving trainers a two hour window to coordinate and take it down. Or it could be that this is how niantic wanted it to be all from the start and with the let down of GoFest they decided to stop legendaries from hatching from eggs and just appear to please the massive amounts of fans in Chicago for Pokemon Go Fest. Or its in relation to the EX raid tests. I sure hope the eggs came back because of EX raid testing.
P.S hope your safe and sheltered from Irma.

Niantic could fix the problem easily by locking out battles as soon as the Eggs appear on the Gyms.
I’d like to see the Raid window go for 2hrs after Eggs hatch.

With all your incredible accomplishments Josh, you have to see why people might be confused by that point.

Oh I see, and have admitted that some of them are down to alternative methods, but games like this are mainly down to luck and chance. If the game is in your favour, congrats! If it isn’t (it mainly isn’t) there’s nothing you can really do. I guess I’ve been really lucky then.