Okay, who else thinks that Niantic COMPLETELY screwed up legendaries?

EDIT: Do you guys think there should be a tiny tiny tiny spawn rate for Legendaries in the wild? To truly add that wild factor for Legendaries, it would help with rural players a bit more I would hope, what do you think?

I think it stinks because I can’t get 10 people who are playing this game to drop what they are doing and go to a raid. Tried to take on a Tyranitar with just 2 other people last week and got our asses handed back to us. I don’t Facebook, so my son’s scout leader sends me texts about raids but that’s about it.

One problem, two faces… @Josh72112 you have too much them near to you, and @bobbyjack8, as you I have too less players here to try it with me…

But in the real problem your right, calling this Legendaries has nothing to do with the game I have played on GameBoy.

I disagree. We have a local group with over 100 players. Most of us didn’t know each other before raids begin. We are able to do 3-4 Lugia groups and new people are being added to our messenger group each week.

We are sharing hunting spots, communicating good spawns in the community and making the game more fun to play.

The execution of the legendaries isn’t without some issues or shortcomings but to see the community reenrergized is a positive thing.

In terms of legendaries rareness or lack there of, Lugia is still very tough to catch even when you do best it and most players have waited so long for the birds we deserve to get as many as we can get.

I do agree with you about the Chicago legendary release…why make them any easier at all? They’re already getting a free lugia added to their account, let them get the true legendary experience with the highs and the lows. You shouldn’t be able to use a pinap berry and a straight throw and still have a 100% chance

I disagree about the rest, these legendary releases have absolutely revived the game in my area…I haven’t seen it like is since the beginning. My bigger complaint is it is virtually impossible for a rural player to even have a chance at catching one. I’m fortunate that I work in a major metro area so I am able to join big groups, but I live in a more rural area with very few players and know it’s not even worth a shot because no one will show up. I also drive, but kids and some adults can’t drive to more populated areas

I guess I look at the birds in terms of the current Meta, they aren’t particularly strong or useful. It’s better than most but not as good as the other legendaries.

With the long wait and short availability I think it’s good, There are people here who are 0 catches for 8-11 attempts. They are getting frustrated and this will help keep it fun

Legendary day today. A rural Lugia took over a gym. Here is my brothers take on our first legendary raid:

With an hour and 20 minutes left, my brother @SCArsenalGunner did not believe that it was possible to draw at least 10 trainers to our rural gym for a chance at capturing a legendary Pokemon. I reached out far and wide. First to local players that my brother and I play with daily, but that wasn’t enough. I had to attract players from near by cities. Franticly, I began to reach out and Pokemon masters replied. I drew players from 30 minutes away with the promise of capturing their first legendary Pokemon. With 30 minutes left we only had a total on 9 players, yet I continued to network and advance the dream of owning a legendary Pokemon even though my brother @SCArsenalGunner told me it was not possible. Not willing to except defeat I reached out to a broader spectrum and messaged on Facebook, and discord with inviction and people were drawn once more. I accumulated a total of 16 people from nothing and the dream suddenly became a reality.

I had effectively drawn the active player base within our region and we were ready for battle. We took assault with 13 minutes left and dominated the Lugia defeating it with 136 seconds left!! I was beyond excited yet nervous at my first chance to catch a legendary!!

Both my brother and I were awarded a total of 7 premier balls because only 4 of us battling were from valor. I curved balled 4 great throws, 1 excellent, without success. I was more beyond nervous that my dream was fleeting with only two throws left. I threw another great throw and finally captured it on my 6th throw!!! A great addition to my pokedex and rated at a 80 % IV. 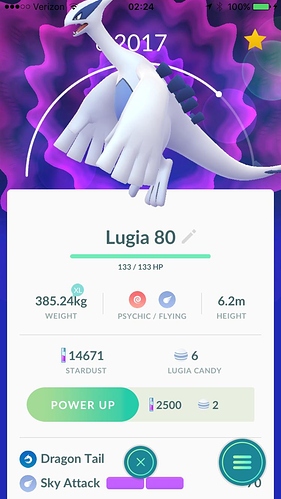 However, my brother @SCArsenalGunner who is a exceptional Pokemon master was not able to catch it. Which demonstrates just how difficult it is to catch a legendary.

I, @SCArsenalGunner, do not have a Facebook, use discord, or any other app for communication. But, tonight me and my brother moved across town and there was a Lugia within view of our new home. We moved heavy objects up three flights of stairs for 3 hours and then a Lugia spawned nearby and I thought it could never be done. Here is what I get for that thinking. Lugia ran on me after my best effort. Didn’t catch it, but loved the Pokemon community showing up from literally every region tonight!!

Here is a screen shot of all the tyranitars battling the gym and the start time and completion time once beated. 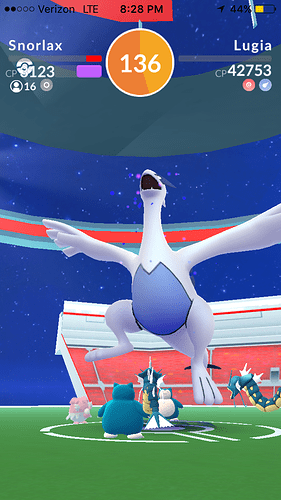 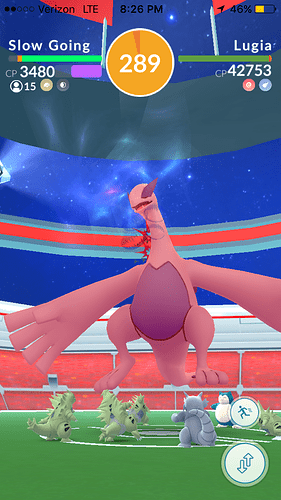 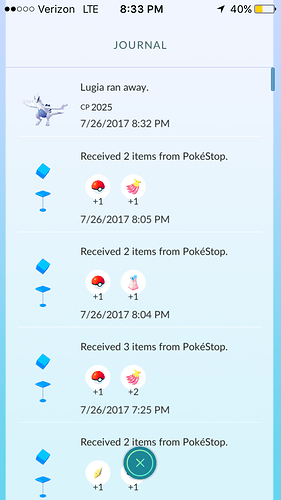