How was your Moltres Day?

Whoa, that is one of those good goals, to duo a legendary.

Wow, good shiny ratio, you would expect no shiny from thst many raids.

I could’ve done more raids if the tire of my bike wasn’t leaking. So I had to bring it to the bike shop, and I lost the group because of that.

We were 6 people with 11 accounts (one of our group had 4 accounts with him!) and met at a gym on the western end of town. We had only one raid where we all had network problems, but the rest worked well.
This time we only stayed in our town and were able to make 19 raids. Less than last time, but still enough. I got one shiny, my husband 5 (!), but I got a 100% IV (non-shiny) bird

- my first perfect legendary!
I’m quite happy with this result. Now waiting for the Ultra Bonus

Doesn’t sound good, right? But it definitely was. I was finally able to raid on LD too😍and I’m happy to have at least 3 Moltres in the pocket. And I did the raids on EX Gyms, so maybe it’ll even reward me my Mew2☘️

Congrats on the marriage, glad you had a awesome time.

Both of you had EPIC results!

Moltres day just started for me

Caught 20 from 23 raids. 2 shiny. Not bad considering our raid group (4 of us with 8 accounts between us) only managed 3 raids in the first hour due to system / connectivity issues… 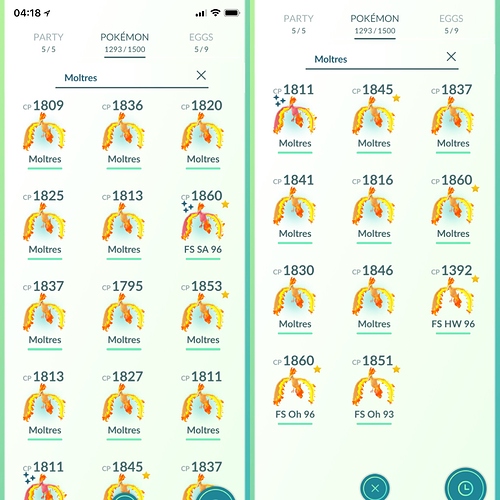 It was a fail.

Was the best. Right?