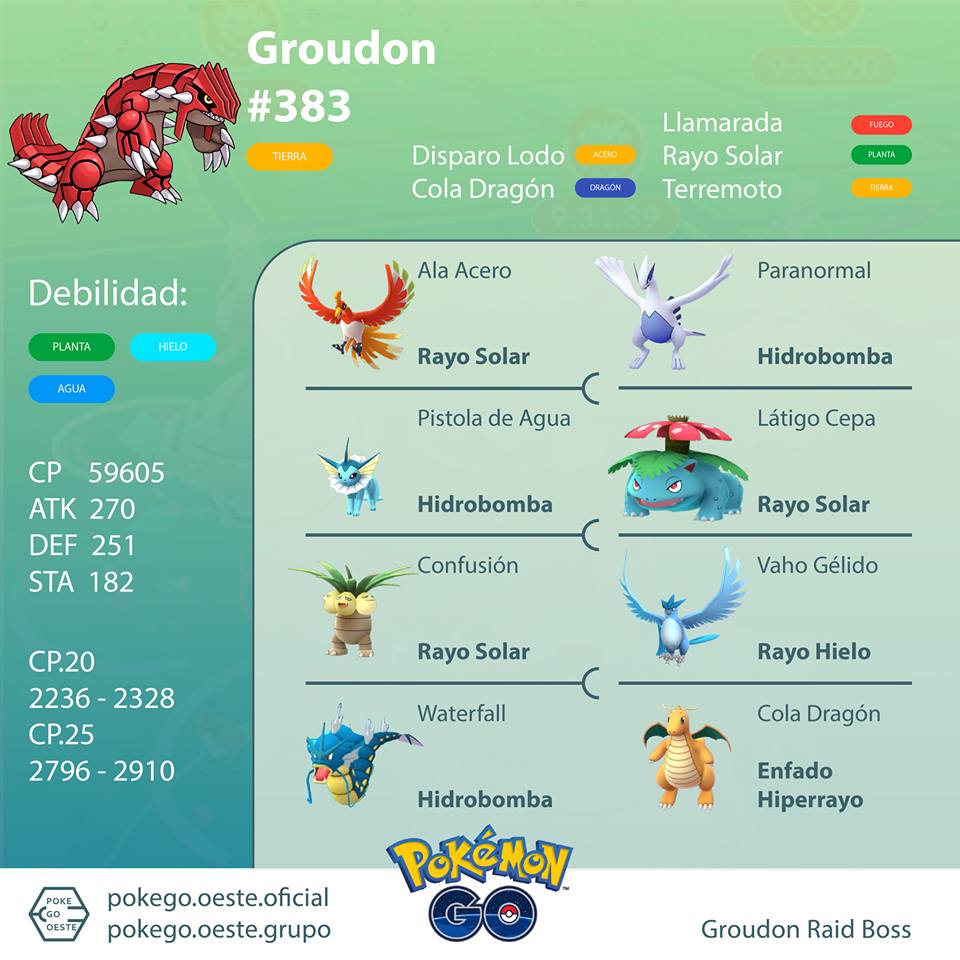 Have you tried 4 on a Solar Beam Groudon yet?

yes…
and we drop that on boosted one(u cant even shot charge),
on regular – feel even more easy than ground boosted(but sure not, we were just prepared).

Drop attempt, not raid, — do him full team(six)

First attempt, did it with 12 and 147 seconds left. Most were below lvl30, Probably could have done it quicker with higher levelled players.

I have similar but have failed to get >6 players.

I had a couple of goes at one playing the families 4 on my own.
Only 2 of the 4 accounts are reasonably well prepared for this. The other 2 have no good Gary’s and only L20 Vapes.
First of all I lucked out with it having Solar Beam and first attempt I went with all Tyranitars that the game auto selected and I timed out by a bit. The second attempt I went with the Water Battle groups I created on all of them.
I got to within 1 character of using all 6 and was a frustrated at not getting the charge moves out successfully straight away and determined I wasn’t going to make it again so rather than throw more Pokemon at it using up revives and potions I just let it time out. The funny thing is that I have no silhouette in my Dex for it even though I had 2 unsuccessful attempts. I guess it needs to run for it to show up?

Since the change to the press button for charge move I’ve found it a lot more difficult to play the 4 phones on my own as having the right way up you can’t see when it’s ready to use. I did the above with the devices upside down but found getting the press wasn’t registering always and some took several attempts.
I’ve tried some low level Raids with them on their sides and the buttons facing inwards which seems to be the better method but I need to practice it a lot more to get my technique good. That and powering a few more up on the smaller accounts.

The wife and kids are going to need to pull their weight on the weekend help get it done with some other friends and not rely on me to do one if I see one during the week to and from work.
I hate relying on randoms to Raid for the following:
Someone put out a call out on Discordsaying they were going to X.
I said I could be there which they acknowledged.
I get there and no ones there so I wait a bit, I get on Disord and ask if they will be long?
They reply sorry they’ve had changed their mind on that one and gone to another one that has a second one a couple of streets away hatching a bit later.
They then expected me to come to the other one to help them as they didn’t have enough.
I had to decline as it was out of my way and I only agreed to the first one as it was close to home.