After pikachu, i would believe Arceus?

Has this Pikachu been confirmed or is this just someone trying to get a joke off the ground?

If you are referring to the announcement picture that had Pikachu for the next EX-raids: Read it in total or just go look at the official channels and see what you find. 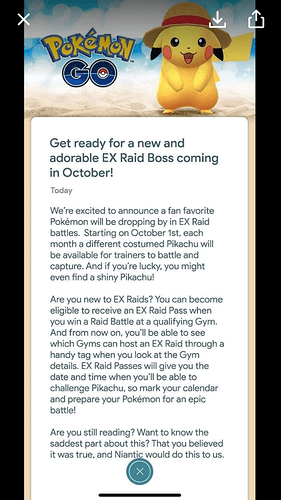 Looks like a fair amount of work went into producing that cute hack.

Could be something real from Niantic (except the last part)

Just a few weeks after having Pikachu with different hats in the wild, they would make the same thing the EX raid boss? It would be too lame for words.

I wouldn’t even be surprised anymore if it was actually true.

Got my first Ex Pass for Monday 16th March since November last year despite Raiding some to many Ex Gyms each week.
A very timely one indeed as it turns out it’s the last Ex Raid until this COVID 19 virus spread is somewhat controlled.
I refused to do the pay for early release of Regigiggle so this was my last chance to get one.
I took an annual leave day off work as the Ex Raid was at an unsuitable day and time.
Got to the Ex Gym 10min before hatch and waited until 15min after. No one else showed up for it and no one had responded in the local Discord Chat for it.
Luckily all the family member accts had the Pass so I was able to do the Raid. Never saw any names from the cloud appear in the lobby either.
Took my time and caught giggles on all the accts. No one had arrived to do it by the time I left the the spot with only 10min left.
It’s times like that I’m glad I don’t play strictly by every ToC.

Yeah, that “last EX raid for the time being” was communicated atleast on twitter on the @niantichelp account. Not sure about Facebook or anything, but it would explain why not alot of people knew about that. Add to that that Regigigas is mostly just a dex filler and the current pandemic and you have a very high chance at no-shows.

We had about a dozen at both of the ones I went to on Sunday. Everybody observed the six-foot “social distancing”, although there was some lively conversation. Two wore masks because they had recently traveled. There was no touching, hugging, handshakes, or high fives. Most left shortly after catching.

I think ex-raids are losing luster for multiple reasons:

Whatever has been an ex-raid boss has later been released into normal raids and sometimes with better moves or shiny forms being available.

Gaining ex-raid passes can be a drama if there aren’t enough players in your locality, or there are too many ex-raid gyms for free to play players to hit each one in a week, making it hit and miss.

The time of the ex-raids often don’t work for many people, thus people give up trying for a pass.

Ways Niantic could improve this:

Give people reasons to make ex-raids a priority, e.g. shiny or exclusive movesets available with no release into normal raids later.

Make it easier for people to obtain a pass, e.g. raiding on any ex-raid gym in your locality gives you a pass to an ex-raid on a random ex-raid gym or whichever got most hits.

Make ex-raids last for a significant part of the day and let local players choose a time between them.