So first of all a little disclaimer.
None of what im about to share is confirmed, its just a pattern that people discovered, and so far it checks out for my own city.
Also i didnt discover this. Its just something i heared via fellow raiders, and i want to share it so you guys can check it out and confirm it for yourselves.

Some background info.
Pokemon GO works with S2 cells. These cells are used for easilly dividing the world map in squares. To view these cells, you can use the website Region Coverer.

Navigate to the region you live in.
For EX-raids, set the min and max level both to 12. Max cells doesnt matter.
Next draw a circel or square arround the area you wanna view (your town, city, region).

The map will show you 1 or more blue rectangles. Each rectangle is a level 12 S2 Cell.
The theory is that 1 EX-raid is given whitin each cell, assuming enough people have done 1 or more raids on the same gym.

With this information, you can determine how to easilly manipulate where to trigger a EX-raid.
If a single cell contains alot of gyms, it will be harder to trigger an EX-raid because there is a high chance alot of people raid on different gyms you want to trigger the EX-raid.
If a cell contains only a few gyms, you could raid all gyms, or just organize your group to raid at 1 gym. It helps if you already know wich gyms can have EX-raids.

For our own town, we though it was weird active raiders in the city center couldnt get 2 EX-passes with 600 raids done, but a guy on the edge of the city got his 6th pass with only 120 done total. Turns out he lives in a different cell, and theres only 14 gyms in total in that cell. A few are not eligeble for raids, others arent very accesible so we have narrowed it down to just 7. With only free passes you could do them all every week.
We are going to start our plan to raid these gyms with a few extra people starting tomorrow, so if the EX-raids keep comming every week ill have an update on this next sunday.

In the mean time i would love to hear from others if you think this could be correct.

Edit 1: New findings have shown that cells for EX-raids may actually be level 11, or even 12 (smaller) so you could have alot more EX-raids at the same time. Assuming they are all “activated” at the same time.
Edit 2: Its level 12, so changed the cells to that.

Fam, that’s great theory! I need to try it out

Well, as shown by the post the HUB just made, its not entirely correct. I see reddit posts that say either level 11 or even 12. Wich is really small in my oppinion, but it does check out with some of the screenshots people place.

I have not seen this personally. I guess that there is a good reason for that. The box I am in is quite sizeable, but mainly just covers a small cluster of small towns and villages and then hills and fields.

3 different gyms in a single cell on the same day.

I just try to raid sprint stores with gyms. My daughter got an invite at her first raid ever. Caught a Groudon at the original raid and then a Mewtwo at the ex raid today. She’s only level 24, and pretty lucky!

I noticed sad thing about that theory
My city unfortunately fitted in one cell.

Part of the thing that makes EX raids even more difficult here is that my country has 0 sponsored gyms.

I have a question about the S2 cells:
We managed to trigger an Ex Raid on 3rd January. After that we have chosen another gym, just a few steps from the first. There, we have done the same strategy as the first time, we were even more as twice as many people but we couldn’t get an invitation this time. Could be the reason that those two gyms are in the same cell? Can’t really believe it but I just can’t imagine why we were not successfull this time.

If 2 gyms are in 1 cell and both can have EX-raids on them then switching between the 2 each week is actually the best strategy. When there is an EX invite on gym A, there will be no raids spawning on that gym anymore untill the EX-raid has been done. So its logical to go for gym B, and even if that gym is in the same cell, you can have an EX-raid on that a week later. As long as it is in the right terrain. Just a few steps could be the difference between in and out.

Also it seems not every cell will have an EX-raid every week. No idea why…

I thought the Ex Passes were handed out from one particular Gym for one particular Raid.
I found out today that’s not the case. A friend joined a Raid at 10am for a Kyogre (they had around 40-50 in different groups do it). At 2pm in the afternoon I soloed a Wartorle and in the time I would have guessed around 20-30 did that Raid as I was farming Whales and watched them come and go.
This was the only time over the last 3 weeks we’ve Raided this Gym. Today we both got an invite for the same Ex Raid.

That are those two gyms. Gym A had an Ex Raid before, triggered by 31 people who did 23 Raids in 16 days. Gym B has been raided 24 times by 65 people in 11 days but did not trigger the Ex Raid. It’s the same S2 cell, the only difference many be the big Street (?) 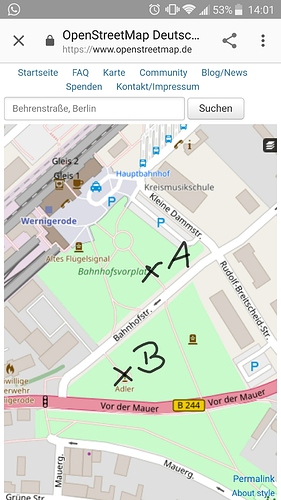 Well all i can tell you for certain is that it is indeed the same cell, and both park areas show up as EX-raid eligible. All other reasons why you didnt get an EX-raid pass are just theories as far as i know.
If you want to be sure of an EX-raid, keep on gym A and find an other gym of wich you know EX-raids happen on. If you insist on staying in that area, i think you just need to keep trying.
2 times no luck and you have a better idea about it, 3 times and i wouldnt touch it anymore