They went out, who got?

I am holding 2 at the moment. 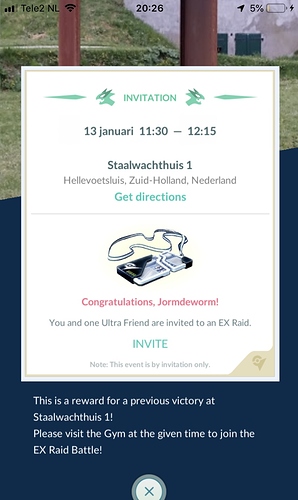 This will probably be the first ever EX Raid that I can do lmao. It is soloable, right?

Edit: No, just realized I can’t.

My ex pass for a spot i never been

If you can arrive at the gym on time, most likely you can raid with others

Didn’t get clock blocked this week and got a Pass on one of the 3 Gyms done. I know 2 had enough accounts Raid it but the bulk of those accts did both so only enough for one to trigger once the Game crunched the numbers.
The other one I was very doubtful would get enough as it’s in a small country town 20-25min Drive from home . I highly doubt they get 20+ unique accounts hit Raids as my Pokemon have been lasting anywhere from 4-10 Days in the Gyms without feeding. This town has 6 Gyms and 3 of them are Ex Eligible. 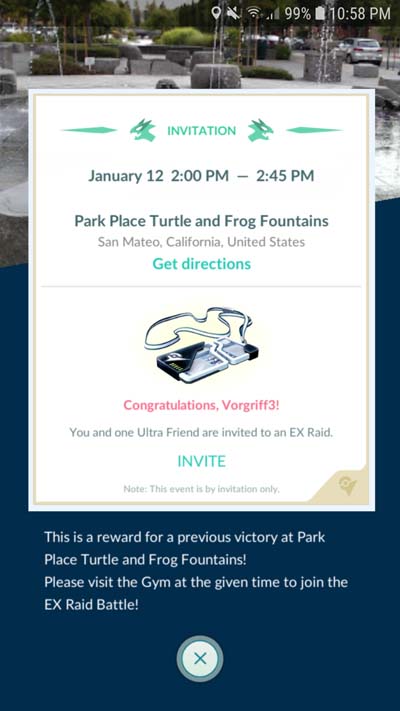 If you can’t raid with others, don’t sweat it – I bet a level 30 trainer could solo this form of deoxys.

We (i.e. my husband and me) tried this time. We went to the next bigger city where there are 3 EX raid eligible gyms of which at least one is triggered with every wave. We raided at 2 of them (there just was no raid at the third one the whole afternoon…) and we were actively raiding in the time since then… We didn’t manage to get the gyms any higher than at bronze badge level, though…
Nothing… Maybe one of the crazy guys (you know… those without a life beyond Pokémon Go…) from our group has a spare invite…

Your Badge level has nothing to do with getting an Ex Pass.
The only things that are important are at less 25 or more unique Trainers (it’s possible that number could be 20) raid the Gym in the wave cycle. Time of day, Raid Tier and numbers in lobby are irrelevant.
The only this that can mess the issue of and Ex Raid Pass up if the minimum numbers required have raided the Gym are:

On the Flip side while it’s known there is a minimum threshold to trigger its also thought there is a maximum amount of Ex Passes that can be issued for a single Gym. If the numbers that Raided the Gym exceeds the maximum threshold all Trainers go into a random draw for issue of Ex Passes.
From experience that maximum could be around 60-80. I’m fairly confident it works in multiples of 20 based on that’s the maximum number of Trainers that can be in any one Lobby.

Thanks for this detailed info.

I was told that chances to get an EX raid invite would be higher with a golden gym badge, but good to know it’s not that important.
Clock blocking should not be an issue I think. Invites usually go out when it’s night here.
Who cares. We will try again…

Niantic put the thing out about Gym Badge level improving your chances way back in the start of Ex Raids.
A few of us basically debunked that as rubbish when the Park near home has 5 Ex Eligible Gyms. We we all L40 and had Gold Badge on all 5 Gyms yet it took 3 of us 6 issues of Ex Pass to get our first Ex Raid Passes while countless players were getting them on the first engagement (Raid) of the Gym and others were getting them every week and only got to Silver doing a Raid plus the Ex Raids.
To say we were getting very Salty about the whole thing is an understatement. Then to rub it in my First one Dusted me off after repeated Excellent or Great curve throws.