I have 130 Duskull candies and I can’t found a good Duskull to evolve! Someone trade a Duskull with me? :3

Don’t bother too much with duskull, just go with a good IV one and evolve that one. As far as I know, dusknoir isn’t even that good. You’re better off with gengar

Really. Dusknoir looks cool, but gengar is just a better ghost type. Do evolve a duskull to dusknoir, for you will need the Pokédex register

Never used dusknoir in battles at all. For ghosts I use Giratina Origin and gengar 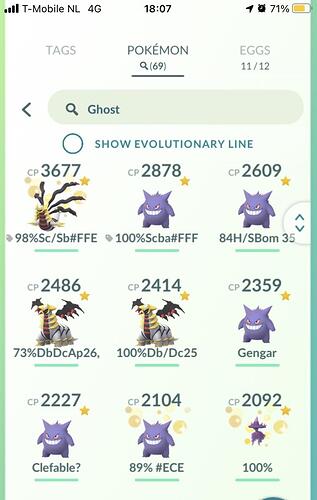 I’d love to give you the Duskull of your wishes, but unfortunately you need to be close to each other in order to be able to trade, so I don’t think I’ll be able to do that…

i kinda suspect you want a high cp duskull to evolve, seeing the topic name.
IV are more important then CP.

That said, it’s just a duskull, and it has no use even after evolving. So if you just want it for the pokedex just evolve any you like.Ypu’ll get new candy. If you want a good one (and with good i mean IV, and not high CP), just be patient. The event last another week and even after that Halloweeen is around the corner. Enough time to get a good one.

Never used dusknoir in battles at all. For ghosts I use Giratina Origin and gengar

Concurring here. I took a hundo Dusknoir to level 40, thinking it might be a beast in battle; but relegated it to Useless Collectable status very shortly thereafter. G-O and Gengar are probably the only Ghost types deserving of meaningful investment… unless one has a Shadow Ball Mewtwo, that is.

It really is a paperweight. I like collecting hundos, but that doesn’t mean I’ll use them. Until it learns the elemental punches, I don’t think it will be any use in PvP either.