Too Much Dust Cost

I’m level 30 and, right now, I have an extreme shortage of dust. I’m sure that I’m not the only one in this boat and that’s largely fine, but this affects one key area: the Pokemon that you intend to evolve.

As-is, even with the recent buff, catching a Pokemon that’s less than 75% leveled is an instant trip to the dog meat factory.

Nobody even looks at the quality if it’s half, or less and nobody would feel bad if they had transferred-out a 100% Pokemon of any kind at that level (super desirable ones excluded).

I made the mistake of leveling-up a bunch of Pokemon instead of saving all of my dust during < 30 levels and now, I have only 3 maxed-out for my level.

This is unfortunate, considering I have space for 400 of them.

This recent change has allowed me to capture some at full health, which is great, but why should the difference between those and any others be literally a month’s worth of dust?

I think that the cost for leveling at high levels is fine, but at the beginning is way too much. I suggest cutting it down to 1/10th the amount and gradually work its way up to current levels towards the end.

Just focus on one mon at a time. Dont spend dust unless the mon is over 80 %. With this new system that boosts the cp of some Pokemon during certain weather’s you should be able to get a chance to catch some with high cp. That way save up on dust.

Then just save dust for the 100IV/best legendaries?
Dont power-up everything to the max

I began only powering to level 30 because the next 10 truly don’t add much. Raiding you only worry about getting enough trainers to help and pvp doesn’t exist. Gyms are pretty joke’ish(?) and you only need wait a day or so and most all will deteriorate to easy take down levels. Level 30 is perfectly fine for most means and purposes.

Heres a useful cheat sheet i use. 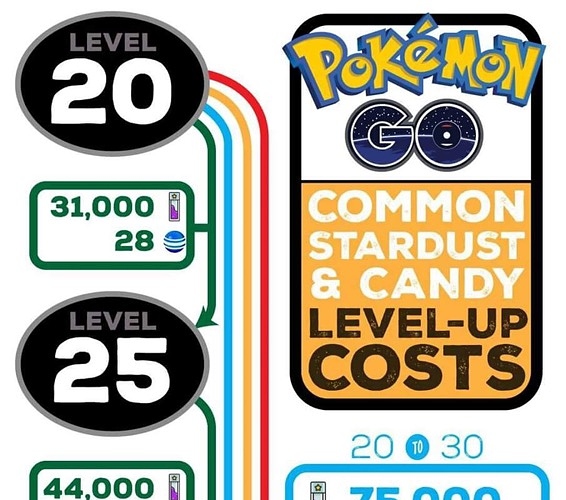