I am pretty happy. I didn’t have that one yet

I hope it’s Saturday the 15th, so I don’t have to worry about because I have something better to do that day. Already got my shiny swablu and Alteria.

I’ve herd a rumour Mega Altaria is coming soon too. Swabluu CD is the best source of collecting XL’s to power my 100% Altaria up to L50

I hope it’s Saturday the 15th

You got what you were hoping for.

Apparently, @celery did not. Sigh.

I’ll have to miss most of it for work obligations. No heartbreaker. I’ve never been a big fan of Swablu.

I’ll take it. Unless I can’t beat my Shiny record.

I do have a Shiny Swablu and a Shiny Altaria already but the Swablu is only 10CP (why?) and the Altaria is very low-leveled as well, so more will come in handy.

I lined up 3 Throw 5 GRazz for chance of either Alo Vulpix, Lapras, Skarmory.
My only interest in this is for a Shiny or 100% Lapras.
Much to my loathing all 3 were Vulpix.
That’s it, I’m done with that Quest. GRazz are way to valuable to waste chasing junkmon.

Lol, with over 360 GR per account i YOLO these quests, even netted me a shiny alolan vulpix.
Had multiple occasions where i had 1 one those quests and 2 normal berry quests for wooper, and still used GR

I had over 550 Golden Razz Berries so I used them now I could. Did a whole load of those tasks and got a Shiny Alolan Vulpix (my first one!) as well. I did get a few Lapras, but not as much as Alolan Vulpix.

yey… after 50 days finally some wild encounters with dragons…

Some aspects of PokeGenie’s remote raid tool are great. Other aspects are not so great – like users who wait in line and then do not confirm to the tool when they have sent their friend request to the host will officially time out and have their place in the group taken by the next in line, even if they actually sent the friend request, in which case the host can get more than 5 friend requests pending in PoGo. The user who timed out can still get invited, while one of those who did confirm their friend request will not actually get an invitation.

That means it’s pretty common to spend time (sometimes up to an hour) on queue for a raid and have to get back into the back of the queue without getting to raid. Especially with a new boss having thousands of players wait on queue to raid it.

Only if Niantic integrates a raid-hosting layer can this be avoided, since no third-party tool has visibility into which users actually got invited and raided.

(Yeah, I had that happen three times already for Xerneas raids since it made its debut yesterday, and just had to vent a little…)

Oh, yeah: And when an invitation comes, it usually gives about 4 seconds to accept it before it goes away (even if there are still 50 or more seconds left in the PoGo lobby countdown). Normally invitations linger for a minute or more before the “nearby” box loses the telltale copper color that indicates an invitation. I can’t understand how the hell that is so different.

AND if you lose the connection while catching, there seems to be no way to get back to resume the catch process. The number of ways this system can fail is starting to exceed its positive attributes enough to make me wonder whether I want to use it any more. The inelegant poke_nav based Discord tools (like PGRR) have more failure-recovery possibilities, and a feedback mechanism. (I don’t see any way for host to tell raiders to wait for a fresh lobby to start, for example; or to flag that some raiders reported READY but hadn’t sent friend requests yet…)

I use PokeRaid as app for remote raiding. Once you get used to it, it only takes like a minute to get into a lobby, and in worst case 2 minutes for the raid to start. Only very rarely things don’t go planned but that is always to blame on the host, so you won’t lose anything but a few minutes max.

I’ve done multiple remote raids in a half hour lunch break just for fun this way. Really easy and fast.

Why does bunnelby got to be a potential shiny Pokemon
I just don’t like the Pokemon, nor it’s evolution, not even their shinies. Why not litleo

@Brobraam We are in complete agreement here. I too dislike Bunnelby - mainly for its design aesthetic, which I think is out-of-step with most other Pokémon.

Bunnelby looks like a Warner Bros. Loony Toons character. Others that share this design include Patrat and Torchic - both of which I can forgive as they are ‘stock’ cartoon representations of of a Chipmunk and chick respectively.

But the absolute acme (if you’ll pardon the pun) of this aesthetic is Chimchar - which I find so repellent that I have trouble even clicking on it to shiny check.
He has no earthly reason for being in Pokémon games - and contrary to his fiery nature he just sends cold shivers of disgust down my spine. Brrrrr

Still searching and Trading for that 100% Bagon 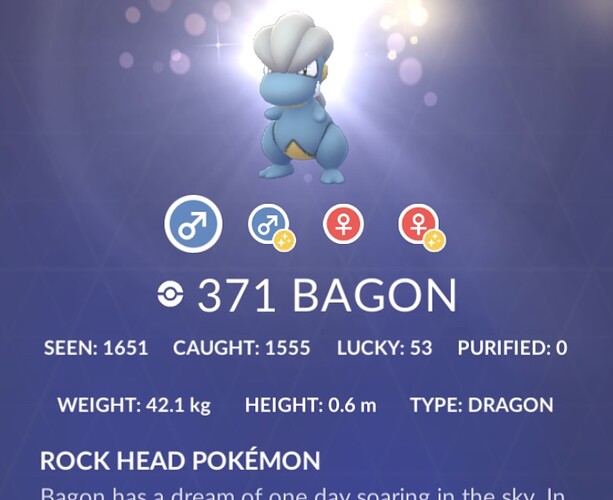