Most people just attack gyms without bothering to change their recommended pokemon to match the defenders. Even less people switch out the Mon they use while fighting, but simply press on and hope to push through the entire gym using only one Pokemon.
Most people also don’t give much thought about what Pokemon to add, and just put their favourite or highest CP or whatever.

However, I figured that sometimes it’s worthwhile to try and maximize the damage you deal as a defender. Just, how to go about that? Well, when adding to a gym that already has one or more defenders, you can often predict what type attackers it will attract. Simply because the game tends to recommend some obvious ones, and otherwise, the attacker will probably pick some obvious counters.

For example, when the first defender puts a Vaporeon, then it’s fairly probable that an attacker will use a grass or electric pokemon. And with that knowledge, you can pick a counter against the attackers counter. You’re not certain which of these two the attacker will pick, but it does greatly narrow down the options you need to consider to deal as much damage as possible in return. There’s rarely a perfect option, but picking your own defender from fire, ice, poison or bug types would give you the best chance at a favourable match up when the first defender happens to be Vaporeon.

So, I picked a typechart and a strategy chart, combined the data, and the result is an extended strategy chart to help pick the best options for rearguard defenders.

Upper part is a standard typechart, lower part is an extended strategy chart. Look for the first defenders’ type in the third column of the strategy chart, find the best types for defenders to add to that yourself in the first column. Last column was already in the original strategy chart. It’s still useful, if you want to look up what type of pokemon to add to maximize defensive coverage. 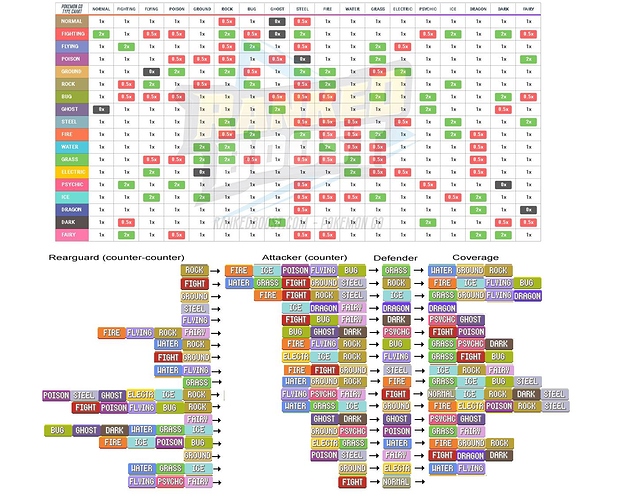