Finishing a new entry up today.

Finally got around to finishing one. 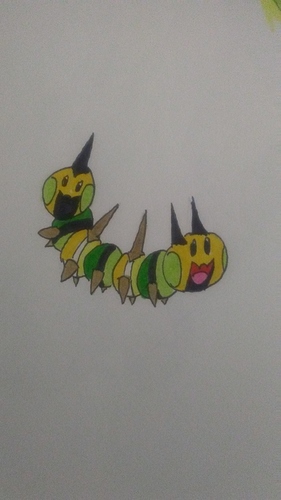 Duplipilar is a common Pokemon with two heads. Each head is capable of thinking independently, yet still act in perfect unison. This causes Duplipilar to move much faster than you’d think and, due to it’s ability to make quick decisions and turns, makes it very maneuverable. Due to it’s horns and spikes, Duplipilar are usually left alone by bird Pokemon.

Duplipilar is based on the caterpillar of a monarch butterfly. It’s name is a combination of “duplicate” and the misspelling of “caterpillar”.

At level 15, Duplipilar evolves into … 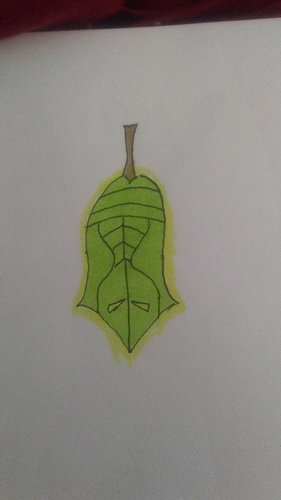 Lumincase spends it’s entire existence hanging from objects, usually trees. Lumicase are usually found in large numbers and by intensifying the glow from their eyes, can light up an entire forest should they choose to. The glow Lumicase gives off warns predators to stay away as it is a very poisonous Pokemon and has a bad aftertaste. When Lumicase doesn’t glow, it is sometimes mistaken for a Metapod.

Lumicase is based off of a monarch butterfly cocoon. It’s name is a portmanteau of “illuminate” and “encase”. 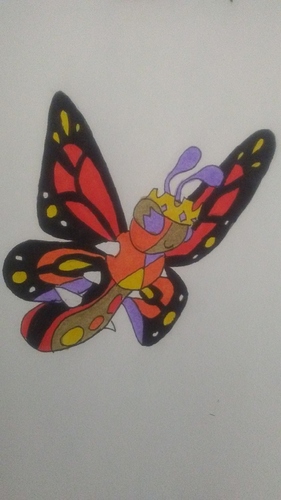 Flutterking are a migratory Pokemon frequently seen in large swarms near the end of warm months, heading to warmer climate. Using their psychic powers, Flutterking never get lost and always know what direction to go. When the time comes, Flutterking will pick up any Duplipilar and Lumicase it finds to also take them to a new area. Despite being ace navigators, Flutterking are not to be underestimated when defending their swarm.

Flutterking is based on a monarch butterfly. It’s name is a portmanteau of “flutter” and “king”, eluding to monarch.

… at level 25, a female Lumicase evolves into … 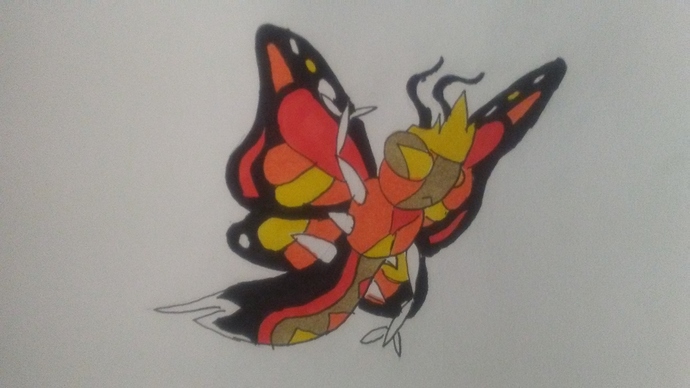 Flutterqueen are the defenders of the swarm and take their role very seriously. While Flutterqueen are beautiful to look at, they are very aggressive and deadly, especially if one of their own is threatened. Fast and agile flyers, Flutterqueen dart at would be attackers with precision, targeting the wings of flying Pokemon. Their claws are small, but can deliver multiple strikes in mere seconds.

Flutterqueen is also based on a monarch butterfly. It’s name is a combination of “flutter” and “queen”.

For those still interested, I’m about to drop several in a row here. I hope people enjoy reading them as much as I enjoy creating them!

As I get ready to update this thread, I just realized that this will bring me to 149 shared Pokemon from my dex.

In honor of Halloween and Yamask being added, I’m going to next share my mummy Poikemon. I actually created this around 15 years ago … yeah … I’ve been doing this a looooong time. lol 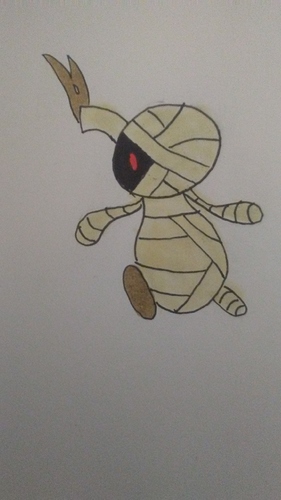 Timankh are ghost Pokemon doomed to remain inside of the structure that they died or were buried in. They inhabit ruins, mausoleums, pyramids, and other similar buildings and can only escape by being caught by a trainer. Unfortunately, they are not aware of this phenomenon and shy away from human contact. Despite their timid nature, they are naturally curious Pokemon who will follow humans who have entered their home. They can usually be seen a safe distance away, mostly hidden from sight, spying on trainers. They will attempt to flee if discovered but, fortunately for those hunting them, are slow moving Pokemon.

Timankh is based on the appearance of a common mummy. It’s name is a portmanteau of “timid” due to it’s shy nature, and “ankh” which is the most common Egyptian hieroglyph used and is considered the symbol of life. 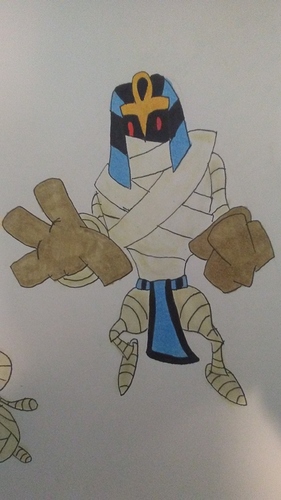 Terrankh are so thankful that a trainer has removed them from their prison, that they feel forever indebted to them. A Terrankh considers itself to be bonded with it’s trainer and will go to great lengths to defend them and those that they love, making them excellent guardian Pokemon. For trainers, Terrankh are easy to train for those who are experienced due to their fierce loyalty and willingness to listen to commands. Should a trainer trade a Terrankh, it will become very sad and unable to battle or train for several weeks.

Terrankh is based off of the common appearance of a mummy as well as an Egyptian sarcophagus. It’s name is a combination of “terror”, “terrible”, or “terra-” which is a suffix for Earth and “ankh”.

Should have something new up tonight. 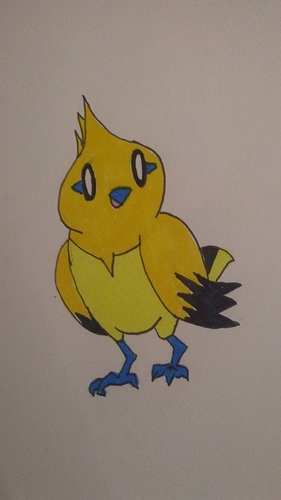 Trisadee are small bird Pokemon who not only evolve into a very useful Pokemon for trainers, but are a common pet due to it’s docile and friendly nature. Trisadee, in fact, are no longer found in their natural forest habitat but instead are now found in urban areas. They are quite welcome in their newfound habitat and are a common sound in any large city. Their singing is considered beautiful and it is difficult for anyone to not stop and listen. Adding to their cheerful demeanor is the fact that they are harmless - Trisadee generate very little electricity and when they do accidentally shock anyone, it feels like a minor static shock.

Tricadee is based on a common canary. It’s name is the second half of the word “electricity”, but also a play on the word “chickadee”. 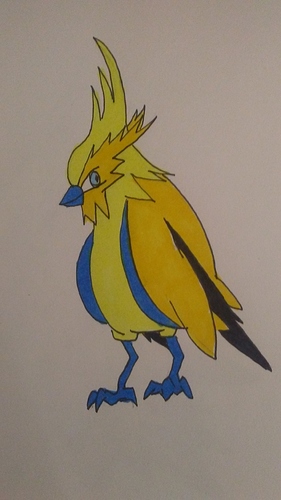 Shockatiel are solitary bird Pokemon who prefer to be left alone. Much like their pre-evolutions, they now prefer urban habitats but would rather remain as high up as possible, making them a common sight on rooftops and especially electrical wires. While they usually dine on bug Pokemon, they like to also drink electrical currents. Fortunately, this does not effect humans as they also add their own charge to the line or object that they are drinking from. Shockatiel are distrustful of humans and are quick to anger though. If they feel threatened or even mildly put out, they are quick to blast the guilty party with a jolt of electricity and flee.

Shockatiel is a combination of a canary and a cockatiel. Their name is a play on the word “cockatiel”, combining it with “shock”.

… at level 38, Shockatiel evolves into … 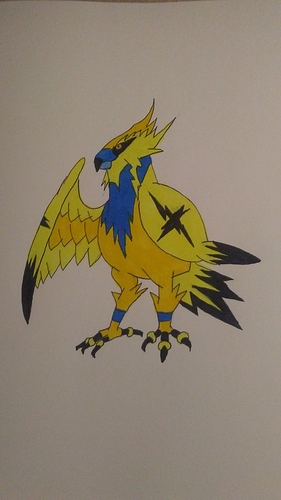 Unlike their pre-evolutions, Swiftrel do not prefer urban areas but would rather live in their original habitats. This includes forests, deserts, and especially plains. Swiftrel were once thought to bring thunderstorms due to their love of them. When they were more abundant, they would often be seen in large flocks during such storms, adding their own electrical charges to them. This was a rare sight since Swiftrel are normally solitary bird Pokemon. Swiftrel are among the fastest Pokemon on the planet and are known to announce their departure with a loud sonic boom.

Seeing if this is still worth doing.

Do you still read this thread?

Honestly, I’m always really enjoying your creations, but it’s up to you if you want to continue or not. If you don’t want to, that’s fine, of course.

They are fun and I like doing them, they just take time to do. I’ll still do them if enough people are reading. It makes it worthwhile.

It’s funny because after years of several people creating a “worm in an apple” Pokemon like this one, the idea has finally been implemented into the game with Applin, Flapple, and Appletun in Sword and Shield. lol

I have created and shared 149 Pokemon now … or an entire dex.

I’m finishing up some new stuff. Will probably be posted after the holidays.

Haven’t forgotten this! Just got a little busy.

So behind on this. lol … I blame my Nintendo Switch.

I do still intend to post more, BUT … a friend and I are also creating a Youtube channel and one of the focuses will, of course, be Pokemon. One weekly segment will be my Fakemon.

Update to my pokemon I made

Mon based off me: