There’s no topic for Incense day so I’ll post here.
My first water-type spawns from incense

For the Incense Day, it seems the Shiny rates have increased for both wild spawns and Incense spawns. In two hours I’ve gotten five Shinies, of which two were from the wild. I have also noticed some increased wild spawns of Pokémon I don’t see as frequently as I did today, such as Beldum, Baltoy, Sentret, Weedle, Wailmer, Roselia, Misdreavus, Barboach, Snover, Oddish, Rattata, Meowth, Meditite, Squirtle, Totodile, Buneary, Psyduck, Abra and maybe a few I’ve forgotten about, so these might be from the event as well. I had Sunny Weather in the game, so that might also be the matter for some of them to spawn more.

Niantic said, “If you’re lucky, Drilbur might make a quaking entrance near you!” Well, in that case, I must have been extremely lucky, because I got like 7-8 Drilbur during the Ground-type Incense Hour, which was, besides Sentret, the most I’ve encountered during that hour, but I rather call myself unlucky, because Drilbur is very common for me, perhaps even the most common Ground-type, so I didn’t really need or want them…

After the first half of the incense event was a complete waste of time, the second half wound up being much kinder to me. I was “incredibly lucky” to catch a few Gothitas, a couple of Drillburs, and several Joltiks; though none of them was more than dex-filler. Shinies included a Bronzor, a couple of Onix, and a few Sentrets.

The event’s highlights were seeing my buddy assist with catches over a dozen times and getting hours without much thought about the pandemic or being confined to our homes.

Is today’s “buddy up” event meant to have any featured shinies? I didn’t notice any mention of shiny Pokémon in the event description, and I haven’t seen a single shiny yet this morning.

I might keep going if I can expect a shiny or two. But I’m not at all interested in spending the whole day, another half dozen incenses, and all my Pokéballs without seeing even one shiny…

Is today’s “buddy up” event meant to have any featured shinies? I didn’t notice any mention of shiny Pokémon in the event description, and I haven’t seen a single shiny yet this morning.

Thanks for the info!

Wow, all those shinies, and I haven’t seen even one yet.

(Other than Eevee, from its Community ‘Day’, of course.)

I miss a lot of these as well.

GoHub reference for Galvantula lists Charge Beam and Discharge as its best move set. It took 15 of my 25 charge TMs to get Discharge. But my frustration made me obstinate. I should have saved them for a Legendary

Is Charge Beam a future move or something? After 5 fast TMs simply toggled between Volt Switch and Fury Cutter, I consulted some other references; and those show only the two (which is also consistent with Poke Genie).

It was truly foolish to blow 20 TMs on a lousy Joltik. I should have just transferred it when it traded from 51 IV to 47, but noooooooo. I was determined to make something decent. 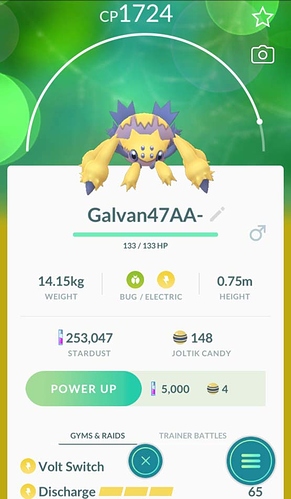 A Pyrrhic ‘victory’… And I already had over 30 better electric type attackers in my collection. What a waste.

Why would you use so many TMs on this as it does not qualify for Great League if that is your goal to use it in Great League?

You, sir, get a like for using the term Pyrrhic victory.

You answered your own question – it was not my goal to use it in Great League. I viewed it as a trophy, and I wanted it to have more worth admiring than just the dex entry and cool Sugimori artwork. I wanted the one I kept to have the best stats and moves that I could get it, and after a few failures I became downright obstinate.

And like any time I make WINNING the most important thing for me in an argument, I usually regret how much that win eventually costs.

I agree with you @vorgriff3 on how Galvantula has a very good design, it is one of the best-looking gen 5 pokemon.

If you like it and that makes you happy then that’s all the reasons for it.